The Incorporated Trades of Elgin

Thanks to funding support from the Heritage Lottery Fund, Elgin Museum has been able to undertake a project based around The Incorporated Trades of Elgin.

The project was created to investigate the trades and industries of Elgin that have contributed to the present industrial scene.  Trades have been vital in the growth and prosperity of the town since the creation of the Burgh in 1134 and the establishment of the Guilds in 1656.  The Trade Guilds were closed in 2014, and their archive of documents and artefacts donated by the last Trades Deacon Convener, James Welsh, to Elgin Museum.  The resources were the initial focus for an intergenerational project linking the needs of different generations with common interests. 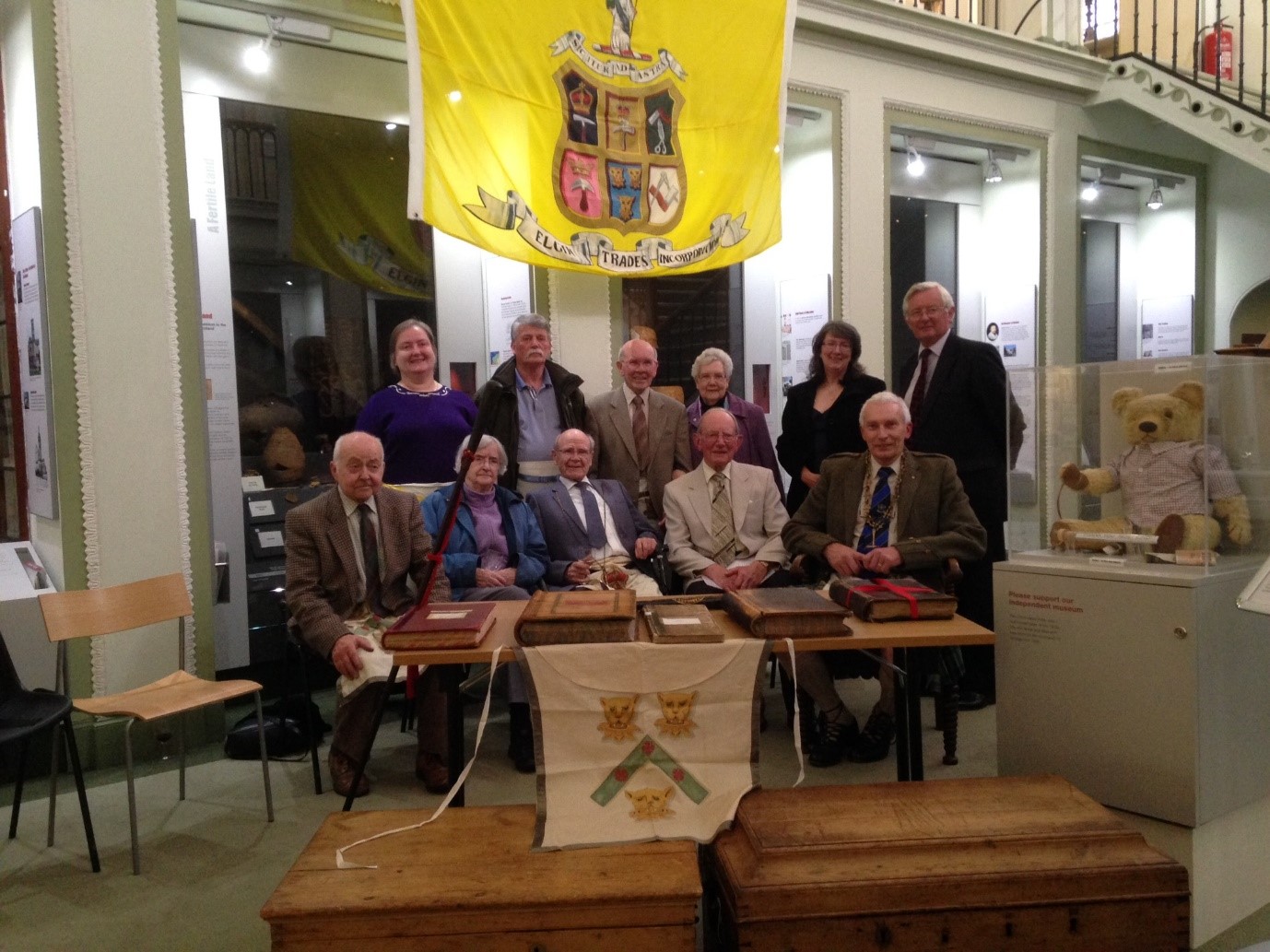 Handover of The Incorporated Trades archive to Elgin Museum in 2014.

The beginning of the trades is linked to the creation of the Burgh of Elgin, in 1134. By 1658, six Guilds of Incorporated Trades had been established in the Burgh: the Squaremen (which include stonemasons, wrights and builders), the Hammermen, the Glovers, the Tailors, the Shoemakers, and the Weavers. Many local people who still live in the Burgh worked in the various Trades throughout their working life, and one aim of the project was to record the memories and experiences of former Trades workers. The project looked to connect older generations with younger generations, to help younger residents have greater understanding of their local area while ensuring this important aspect of Elgin’s history is not lost.

The Incorporated Trades project had a number of outcomes:

The archive of The Incorporated Trades of Elgin, comprising artefacts and documents, provides a record of the development of the trades within the Burgh of Elgin. Investigations carried out under this project revealed many links with current family names in the Burgh, as well as with locations and with street names in Elgin. The archive also offers snapshots of life as an apprentice and of living conditions at various times in the Trades history. Although The Incorporated Trades of Elgin was closed in 2014, there are still many connections with modern industries in the Burgh. Connections with weaving, for example, through the world-famous Johnston’s of Elgin woollen mill who have been in continuous operation since 1797 and today employ around 600 people in the Burgh.

As part of The Incorporated Trades Project, some of those involved with the Trades were interviewed about their memories and experiences of the Trades. These “oral Histories” were recorded.

Oral history is an important way of recording the past for future generations. It allows us to investigate the past by talking to people about things that happened in their lives. It is an excellent primary source of information about aspects of the past and, used alongside other sources, gives a broader picture of an event. The aim of oral historians is to collect memories that give different perspectives on the past.

In the initial phase of the project, James Welsh, last Trades Deacon Convenor, was interviewed (in 2016) about the Incorporated Trades, what they were and what they did.  For the interview, semi structured questions were used that could be expanded upon.

The six trades, comprising Glovers, Tailors, Hammermen, Squarewrights, Shoemakers and Weavers, “claimed an exclusive privilege of exercising their craft within burgh except the weavers’ incorporation” (Parliamentary Papers 1780-1849 Great Britain. Parliament House of Commons minutes dated 5th November 1824) and influenced the town of Elgin from their first conception in 1268 all the way to 2014, and what they achieved in their 800-year history is recorded in their minute books.

In 2014 the Trades folded and James Welsh, last Trades Deacon Convenor, donated the archive and objects relating to the Trades to Elgin Museum. These have in turn become a part of the story of the Museum. According to Mr Welsh, “these craftsmen were central to life in Elgin and the surrounding areas….” (The Press and Journal (Inverness) 14 May 2016).

Although the Trades ceased to be active in 2014, they still exist in other ways: through the words of the interviewees, the streets in Elgin that bear the names such as Weaver Place or Culbard Street (after one of the glovers), the stone masons that still work in the area and at Johnston’s of Elgin, the mill established in 1797 is the same mill which produces woollen products today.