Keep up to date with what’s been happening at Elgin Museum in 2021 with our regular Museum Updates on the Newsletters page.

We’re delighted to welcome Rachael Forbes to the Elgin Museum team. Rachael will take up the Teens and Tweens Project Coordinator role this month. Rachael is passionate about history, the arts and facilitating education within the community. Her background is in mixed media arts with a BA specialism in Performance Costume and an MA in Textiles. She has years of experience working across various museum, art gallery, charity and education settings facilitating creative and community learning with people of all ages and abilities. Rachael loves making learning fun, engaging and accessible for all, she is very much looking forward to beginning her Project Coordinator role with Elgin Museum and engaging young people with their local and world history. The focus of the project will continue for the time being to be in the delivery of home-based and digital activities. We’re sure you’ll join us in welcoming Rachael to Elgin Museum!

All dressed up and no-one to see us!

New reconstruction of Elginerpeton pancheni by Lynne Strachan @ CuriousCranberry, commissioned for our new exhibition At the Water’s Edge

As you will have seen in the current newsletter, the opening of our new exhibition At the Water’s Edge is one of the activities postponed due to the coronavirus outbreak.  However, everything is almost ready for when the Museum does open – the cases are in place, the interpretation panels hung, and the models installed.

Two of the fossils on loan (those from Oxford University Museum of Natural History) are also in position and the staff at National Museums Scotland (NMS) are committed to couriering the remaining loan items at the earliest opportunity.  Dr Stig Walsh was due to deliver the loans from both the British Geological Survey and NMS on Thursday 19th March but the rapidly worsening situation meant that all non-essential travel was cancelled by NMS the afternoon before, just a couple of hours before he was due to leave the office.  We were so nearly there, but obviously the health and well-being of staff and volunteers takes priority.

The panel that explains the finding of the Elginerpeton material includes the photograph below, taken by Robert Clack in 1992, when a team from NMS visited the site at Scaat Craig.  Professor Jenny Clack (University of Cambridge) was Per Ahlberg’s PhD supervisor and the person that Per first showed the OUMNH fossils to when he realized that they were tetrapod bones, rather than the labelled fish material; Per is the photographer at the left of the picture.  Sadly, Jenny died last week (26th March) after a long period of ill health, but her help in the preparation of the exhibition has been invaluable; the EM Geology Group wrote to her husband, Robert, to offer our condolences and to let him see the finished artwork. 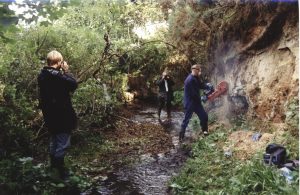 Excavation of the Scaat Craig site in 1992, led by staff from National Museums Scotland (© Robert Clack)

Janet is further adding to the Elginerpeton story with a new display focusing on the discoverer of the Scaat Craig site, John Martin. Martin was a school teacher at nearby Clackmarras and subsequently became the first curator of Elgin Museum. In 1837, he made the first geological map of Moray and this subsequently appeared as Plate I in Patrick William Duff’s book ‘A Sketch of the Geology of Moray’, published in 1842. 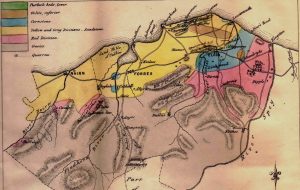 As well as Martin’s map, the display will include additional fossil material from Scaat Craig, kindly being loaned by Bob Davidson, who is behind the camera in the centre of the 1992 photograph. Janet and Dave visited the Scaat Craig outcrop last month and went in search of the old school house. Completely unexpectedly, they were invited in by the current owners and given a tour of the house. Although much changed since Martin’s time, the original layout can still be determined, and both very much enjoyed the hospitality offered. 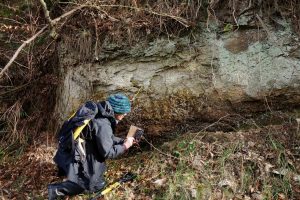 Janet investigating the important outcrop at Scaat Craig (but distracted by the botany!).

Although the exhibition is not yet open, the web pages remain live – have a look if you would like a taster of what is to come.  There is also a ‘Coasts and Waters’ quiz based on these web pages if you want to test yourself on our Education & Outreach page.

Back to the top